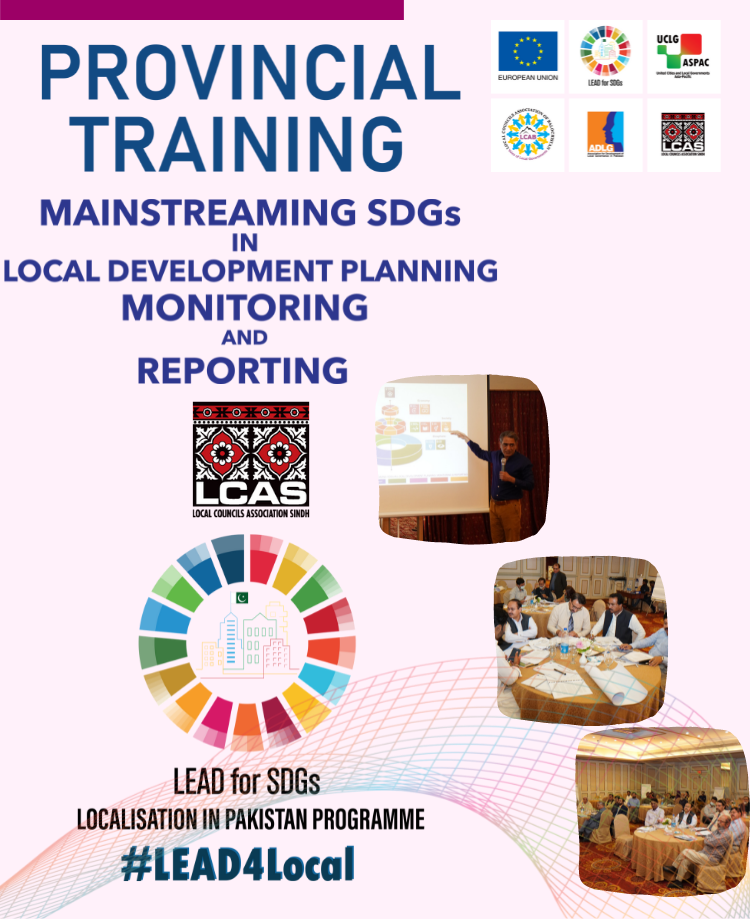 Karachi (30th and 31st of March 2022) LEAD for SDGs Localisation in Pakistan Programme conducts two-day Provincial Training for Government Officials to mainstream SDGs in Karachi the training was arranged to build the capacity of the government officials from different districts of Sindh. The programme focuses on mainstreaming SDGs in local development planning, monitoring l the United Cities and Local Governments Asia Pacific.

Government officials from seven districts of Karachi, Thatta, Tando Mohammad Khan, and Jamshoro, from the departments of Local Government, Education, Health, Finance and Planning & Development actively participated in the training.

It is necessary to arrange such training sessions which can build the capacity of government officials and CSOs, so they can work together to amplify the rate of localisation and achievement of Sustainable Development Goals (SDGs) till 2030 in Sindh, said President Local Councils Association Sindh, Mr Syed Kumail Hyder Shah.

The technical and advocacy support of all the stakeholders will bring fruitful outcomes and extensive growth for achieving the agenda 2030 all over Pakistan, said Mr Ameer Ali Shah, General Secretary, LCAS

Day one kick-started with the successful sessions comprising a detailed introduction to SDGs, and the participants were capacitated with the understanding of International, National, and Provincial level SDGs frameworks. The discourse of training includes the background and context of SDGs along with detailed knowledge about the global agenda 2030 and National commitment towards the 2030 agenda.

The education department focused on SDG goal 4, the health department chose SDG goal 3, the local government department and Civil Society Organisations (CSOs) worked on goal 6 for the exercises of SDGs prioritisation at the district level.

On day two the participants performed the exercises regarding SDG data collection, monitoring and reporting following the group activity for proposing actions to mainstream SDGs at the district level. The challenges of monitoring and reporting SDGs are continuous and concerned, it is necessary to focus on the active prioritisation and alignment of SDGs with our current projects, said Mr Azhar Saeed, SDG Expert/Trainer.

The suggestions came on the floor, regarding the formulation of task forces at the district level. These task forces shall align all the relevant policies, legislations, coordinations, ongoing developments and projects with the SDGs. In this regard, CSOs, academia, and research centres should support the government departments in achieving Agenda 2030.

The responsibilities and functions of local governments were inculcated in the training. Where the participants exercised and pondered on how the local tiers are significant to implementing SDGs. The government officials uncover the grassroots level facts regarding sources of finances for local governments while proposing more funding options to strengthen the local government structure.

Unquestionably, monitoring should be a continuous process. All the departments pledged to actively involve themselves in the data gathering, monitoring and reporting process.

It is indispensable to form district task forces at the lower level so they can avail all the available resources and methods to achieve effective localisation of SDGs come together on the forums where experts from diverse fields will be sharing their suggestions to accelerate the process of monitoring and localizing the Sustainable Development Goals in Sindh.

The trainers tabled the proposed scope of future awareness activities for prioritised SDGs far and wide in Sindh. The team specifically mentioned that most of the time it is the issue of awareness and technical knowledge, as Government and Civil Society organisations are working hard on different areas of SDGs, but they are unfamiliar with the mechanism of monitoring and reporting on SDGs.

While signing off the meeting all the participants praised the unique initiatives arranged by the partner organisations of LCAS, EU and UCLG-ASPAC under the LEAD for SDGs Localisation in Pakistan Programme.